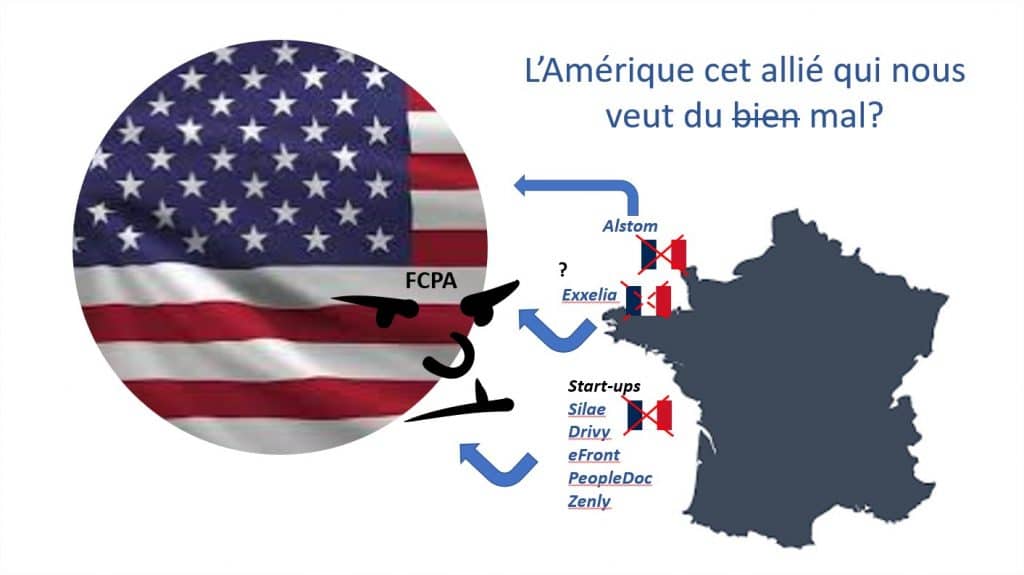 This article, I concede it to you goes out of the strict framework of the #DigitalSovereignty, however the economic war that I describe to you, makes that it is intimately linked, and that it is essential to us, if not sufficient to fight against this war which does not say its name which is led to us!

America, this ally that wishes us bad?

I know that the title for many will appear provocative, however it reveals a reality that no one wants to see, especially among our ruling elites, politicians, or industrialists and this despite some whistleblowers!

As I have often had the opportunity to explain, the extraterritoriality that American law has given itself is used shamelessly to acquire economic and industrial supremacy, by attacking companies, particularly European and French ones, by various means.

Understand the game that is imposed on us

The legal tools most often discussed in the digital domain are the Patriot Act and the Cloud Act. However, we often forget to mention the weapon of mass destruction represented by the FCPA (Foreign Corrupt Practices Act).

If we look at 2021, strangely enough, no American company has been caught with its hand in the jam jar… On the other hand, it is interesting to note that there are two European international banks in the crosshairs, namely Deutsch Bank and Credit Suisse.

It is a strange coincidence that sometime later the Swiss government opted for the purchase of the American F-35 without holding a vote of its citizens, against its own democratic rules, even though the American plane was the least expensive in terms of performance and operational availability, but also in terms of cost!

If we look at 2020, there again a majority of foreign companies, even European, but with one or two American companies…

If we go back to 2013, we discover that Total is targeted but also people like Frédéric Pierucci, a senior executive at #Alstom. The latter will be imprisoned in 2014 under spurious charges. The American judicial system being organized to obtain guilty pleas more advantageous than the risk of going to trial, this allowed to put pressure on #Alstom and to officially prosecute them… I invite you to read Frédéric Pierucci’s account of this terrible adventure “The American Trap”, an attack that resulted in the loss of a jewel of our industry of strategic interest for our national defense.

Why are we interested in the #Alstom affair? It is fascinating and emblematic of the way the United States operates in more ways than one.

The first is their use of the FCPA as a weapon of economic warfare. It is important to understand that international agreements have been made within the framework of this law to fight corruption. France, as well as several other Western countries, have signed these agreements. The signing of these agreements has unfortunately allowed the Americans to gain the upper hand, thanks to an asymmetry of judicial and investigative means (FBI and American intelligence services) between the US and other countries. The Americans are therefore in a position of strength, including when a procedure is initiated by a French judge, for example, the legal procedure is conducted by the DOJ, with the initiating country receiving only a portion of the fines imposed.

The second is the links that we can guess between the DOJ and large American companies, particularly in this General Electric (GE) case. Without being a legal expert, I wonder about this type of collusion, a mixture of genres between the DOJ and an American company, resulting in a direct threat to our national interests! Wouldn’t it be possible to legally attack GE on these grounds? Can we not attack the DOJ and the application of the FCPA in this case ?

The third, which is of particular interest to us when we talk about digital sovereignty, is that in the context of an FCPA proceeding, the DOJ can seize all electronic exchanges passing through American servers and providers. I find this information most interesting. Indeed, for all our industrialists who only see digital or IT as a convenience, have you considered this major risk of choosing an American supplier for your collaborative solutions, emails or even video conferencing or instant messaging systems?

Any western company (Yes, China is not concerned, it did not sign those anti-corruption agreements…) with a little bit of thought and analysis of the risks involved should refrain from working with the #gafams, at the risk of suffering a similar fate to #Alstom.

Do we have the antibodies to fight against these repeated attacks?

You will tell me, so what, this allows a better understanding of each other, facilitating our bilateral relations. However, when we discover these names that have played or still play important roles in the political, economic or media life in our country, it raises questions, doesn’t it? When, since 1981, we have had an increasingly marked alignment with, or even subservience to, American interests, we are entitled to ask ourselves the question, do these “Young Leaders” really defend French interests or are they American Trojan horses?  Indeed, if in the absolute we can only praise the intention, that of promoting greater understanding, through interpersonal relationships by bringing together people judged to have high potential French and American. However, it is legitimate to wonder about the drifts observed, for example, in the pro-Gafams discourse in our management and media circles, and the French names that have been at the helm of the digital industry for example…

The same questions are asked about the media’s pro-American (Democrat) orientation that we can observe, as well as the tropism for the economic-liberal ideology that permeates the high spheres of our economic circles.

Other facts that we can denounce, if not highlight, are the hegemony of American strategic consulting and auditing firms, which intervene and advise not only the large groups of the CAC40, but more and more the government and the administrations. As the McKinsey affair, which has been in the news, has shown. We also know that all the information/data collected by these companies goes directly to the American side to feed their economic warfare organs!

The other tool of “soft power” that should not be neglected is the cultural steamroller. By this I mean the American media and film offensive. Since the end of the 1980s and the beginning of the 1990s, our market has been invaded by American productions, both films and series, formatting our citizens to the American way of seeing the world (the good guys: them, and the bad guys), polluting our cultural identity and making us adopt an inept new language that ignores the subtleties offered by our beautiful language of Molière. Worse still, the loss of our linguistic references is gradually causing us to lose our own way of thinking, our ability to approach the world, and to fall into American Manichaeism.

In addition to this “soft power”, it is clear that our elites are participating in the decay of what was the strength of the French model, through an absence of vision and political courage. The following examples show us this.

Our educational system, once a source of pride, is now on the verge of collapse. It is becoming, with the passing of ministers and the renunciations, more of a factory for morons than anything else, with an abysmal drop in the level of science and more particularly in mathematics, but also in the mastery of our language and our history. How, under these conditions, can we not worry about the capacity of France to produce its next elites? Equally worrying is the fact that business schools and their complete adherence to the Anglo-Saxon vision of the world and economics are taking precedence over engineering schools in higher education.  Our former intellectual flagships have completely lost their capacity to produce French elites, and in particular Sciences Po, which is now producing good little wokes soldiers ready to attack the bastions of our culture that are still standing and turn them into globalized machines, in the American style of course!

A judicial system that is even worse off than our educational system, making it impossible to fight back, on the same principle as the DOJ is doing to us, against the big American groups. The budget underfunding is glaring…

And what about Europe in all this? It is clear that Europe as it is constructed not only struggles to defend its own interests and indeed ours, except in a few specific areas (GRPD) but also weaves a legal straitjacket that prevents us from defending ourselves. The only answer to the recurrent criticism it receives with each failure is that we need more European federalism. This will only lead to greater subservience to the Americans, given the strong tropism of some of our partners towards America, particularly in matters of defence.…

And the last point I would like to address is our inability to defend our nuggets (start-ups or innovative SMEs) from American raids. The worst thing about digital technology is that our leaders never stop claiming our inferiority, but we never stop seeing our nuggets bought by the American digital giants. Then the question arises, why our leaders are in the ability to see our real capabilities, is it incompetence or a desire to destroy our country?

Can we still turn the situation around?

I will admit that I am anything but optimistic. However, I can’t give up this fight, even if now the only weapon at my disposal is my pen. Unfortunately, I do not think that change will come from the head, which is too “rotten” for all the reasons I have shared with you. The only hope can only come from the base, from all the actors of the civil life, small entrepreneurs, local SMEs, consumers that we are, who will end up integrating that to find a certain prosperity, and a satisfaction in the jobs that we do, let us choose local products, respectful of our philosophical, environmental, and social values. This of course also and especially applies to our approach to digital technology…

It is time to get our act together, to accept that we are all part of the same nation, that our interests are not identical, including those of our partners and allies, and that we are entitled to defend them. It is time to fight to regain our cultural, economic, strategic and digital sovereignty!