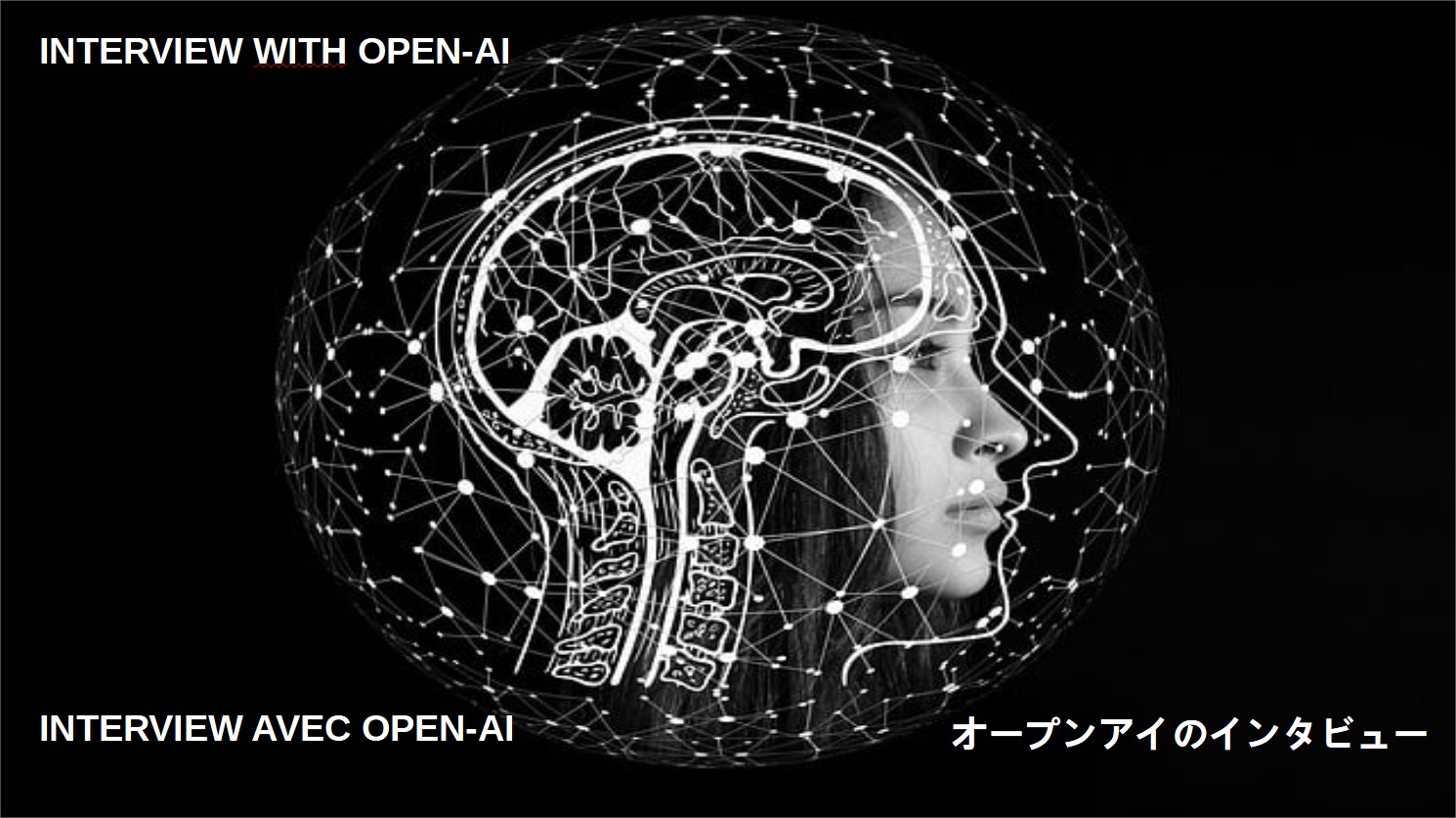 The end of 2022 saw a number of articles on ChatGPT, revealing a concern among some teachers that an assignment written from the OpenAI would have allowed them to pass the law exam…
Other articles pointed to the fact that the Open AI had probably been equipped with a software layer allowing filtering to give polite, “politically correct” answers, these are presumptions…
In front of this buzz I decided to go and have a look by myself and I propose this restitution in the form of an interview on digital sovereignty, which is of course one of my favorite subjects!

[EM] What are the geostrategic and economic impacts of using American digital solutions in France?

[EM] What dangers do US extraterritorial laws represent for French industry?

[ChatGPT] : U.S. extraterritorial laws may pose dangers to French industry in certain situations. These laws allow U.S. authorities to exercise authority over companies and individuals abroad in certain situations. For example, if a French company does business with U.S. companies or uses U.S. technology, it may be subject to U.S. laws on competition, intellectual property protection, data protection and other areas.
Extraterritorial laws can pose problems for French industry in several ways. First, they may result in additional costs for French companies to comply with U.S. requirements, which may reduce their competitiveness in the marketplace. Second, they may result in conflicts of law where U.S. laws conflict with French laws or with standards and regulations in other countries. Third, they may be used by U.S. authorities to impose sanctions or penalties on French companies accused of violating U.S. laws, which may result in significant financial losses to those companies.
It is important to note that extraterritorial laws may vary depending on the law in question and the manner in which it is applied. It is recommended that you educate yourself on the applicable laws and regulations and take the necessary steps to comply with those laws and regulations when dealing with U.S. companies or technologies.

[EM] : What to think about the strength of the French digital ecosystem ?

[EM] : What risks do cloud giants like AWS, Microsoft and Google represent for the French and European industry ?

[Chatgpt] : Cloud giants such as AWS, Microsoft and Google can pose risks to French and European industry in certain situations. Here are some examples of potential risks:
1. Competition: these companies are major players in the cloud market and can have a significant influence on the price and quality of services offered. This can lead to increased competition for French and European companies offering cloud computing services.
2. Dependency: the use of cloud computing services can lead to dependency on the providers of these services. If a French or European company is heavily dependent on one of these cloud giants, it may be vulnerable to disruption of its services or price changes.
3. Privacy and information security: French and European companies must be mindful of privacy and information security when using cloud services. They may be subject to U.S. privacy and information security laws, which may differ from laws in France and Europe.
4. Impact on employment: French and European companies that use cloud computing services may be tempted to reduce their internal IT staff in favor of outsourcing these services. This may have an impact on employment in the IT sector in France and Europe.
It is important to note that these risks can vary depending on how cloud services are used and the company using them. It is recommended that the benefits and risks associated with the use of these services be carefully evaluated before making a decision.

[EM] : What about the technological difference between the American cloud players (AWS / Microsoft / Google) and their French or European competitors ?

[ChatGPT] :There is often a notable technological difference between American cloud players such as AWS, Microsoft and Google and their French or European competitors. These cloud giants are global companies with large R&D budgets and the ability to develop and implement new technologies at scale. As such, they may have more advanced technologies and more comprehensive services than some of their French or European competitors.
However, it is important to note that this technological difference may vary depending on the technology in question and the company in question. There are French and European companies that are also at the forefront of certain areas of technology and can offer technologies and services comparable to those of the American cloud giants.
It is recommended that the advantages and disadvantages of each technology solution be carefully weighed before making a decision, taking into account factors such as business needs, cost and quality of services offered.

[EM] : What about the lobbying actions of AWS, Microsoft and Google in Europe and in France in particular? Are there risks of corruption?

[ChatGPT] : The lobbying actions of companies like AWS, Microsoft and Google in Europe and France can have an impact on the policies and regulations in place in these regions. Companies can use lobbying techniques to influence the decisions of policymakers and regulators to defend their interests and promote their products and services.
It is important to note that in most countries lobbying activities are regulated to prevent corruption and ensure transparency. In France, lobbying activities are regulated by the Sapin II law on transparency in public life, which provides for the creation of a register of lobbyists and the obligation for lobbyists to declare their activity and the financial means they use.
It is recommended to inform oneself about the regulations in force regarding lobbying and to make sure that one complies with these regulations when engaging in this activity. It is also recommended to be vigilant and transparent when approached by lobbyists or when using their services.

[EM] : According to the various information on the net, can we consider that all the lobbying actions of AWS, Microsoft and Google are in compliance with anti-corruption regulations ?

[ChatGPT] : It is difficult to say with certainty whether all lobbying by AWS, Microsoft and Google complies with anti-bribery regulations, as this depends on many factors such as the country in which it is conducted, the regulations in that country and the manner in which it is conducted.
It is important to note that in most countries, lobbying activities are regulated to prevent corruption and ensure transparency. Companies must comply with these regulations when engaging in this activity. However, violations of anti-bribery regulations may occur, either intentionally or inadvertently.
It is advisable to be aware of existing lobbying regulations and to ensure compliance with those regulations when engaging in this activity. It is also recommended to be vigilant and transparent when approached by lobbyists or when using their services.

[EM] : What about Microsoft’s commercial approach of not charging for licenses for some customers ?

[ChatGPT] : It is difficult to make a general assessment of Microsoft’s business approach of not charging for licenses for certain customers, as it depends on many factors such as the company’s motivations, the terms of this offer, etc.
It is possible that Microsoft has adopted this business approach in order to promote the adoption of its products and services to certain customers, especially in the context of the COVID-19 pandemic. This may be a strategy to strengthen its market presence and attract new customers.
It is important to note that this marketing approach can have advantages and disadvantages for the customers involved and for the company itself. For example, customers who take advantage of this free offer may save money on licenses, but they may be limited in their use of these products and services. In addition, this may impact companies that provide similar services and have license-based revenue models.
It is recommended that the advantages and disadvantages of this business approach be carefully evaluated before deciding to use it. It is also recommended that you carefully read the terms and conditions of the offer and ensure that you understand the limitations and obligations associated with it.

[ChatGPT] : It is difficult to say in general whether free offers from companies such as AWS, Microsoft and Google should be considered economic dumping, as this depends on many factors such as the motivation of the company, the conditions of this offer, the impacts on competitors, etc.
Economic dumping is defined as the practice of selling a product or service at a price below its cost of production or normal market price in order to destabilize competitors and capture market share. It is prohibited by the World Trade Organization (WTO) and can be sanctioned by the relevant national or international authorities.
In the case of the free offers offered by AWS, Microsoft and Google, it is possible that these are marketing strategies to promote the adoption of their products and services to certain customers, rather than the practice of economic dumping. However, it is important to note that these free offerings may have an impact on companies that provide similar services and have license-based revenue models. If these free offers are found to be unfair and have a negative impact on competitors, they may be considered economic dumping and sanctioned accordingly.
It is recommended to carefully assess the impact of these free offers on competitors and to comply with competition rules?

I must say that my impressions after this test are mixed. First of all, I was surprised by the fluidity of the creation of the texts which constitute the answers… but I was disappointed by the content because the answers clearly lack depth and consistency.
I was then interested in how the GPT-3 of the Open AI works. I can only recommend you to read this excellent article (Zednet – August 2020)
If the ChatGPT represents an undeniable interest and we understand its usefulness for many digital companies (from customer service to writing code from natural language), I remain doubtful about the ability to produce content with a solid background on issues where there is a synthesis work, an interpretation and justification of an opinion.
However, I think that this is a field that will develop and that it is necessary to monitor its evolution, in order to draw all the benefits that could be of interest to companies, but also to identify the ethical problems that could be raised by a deregulated availability of this tool.
It is important to remember that at the educational level, learning knowledge by oneself and assimilating it through personal work and an indispensable intellectual effort will allow us to maintain a desirable level in order to maintain our capacity to master our technologies.
However, we can already see that the ease brought by tools is inevitably accompanied by a drop in the general level and an incapacity to master the fundamentals of mathematics, language and reasoning…