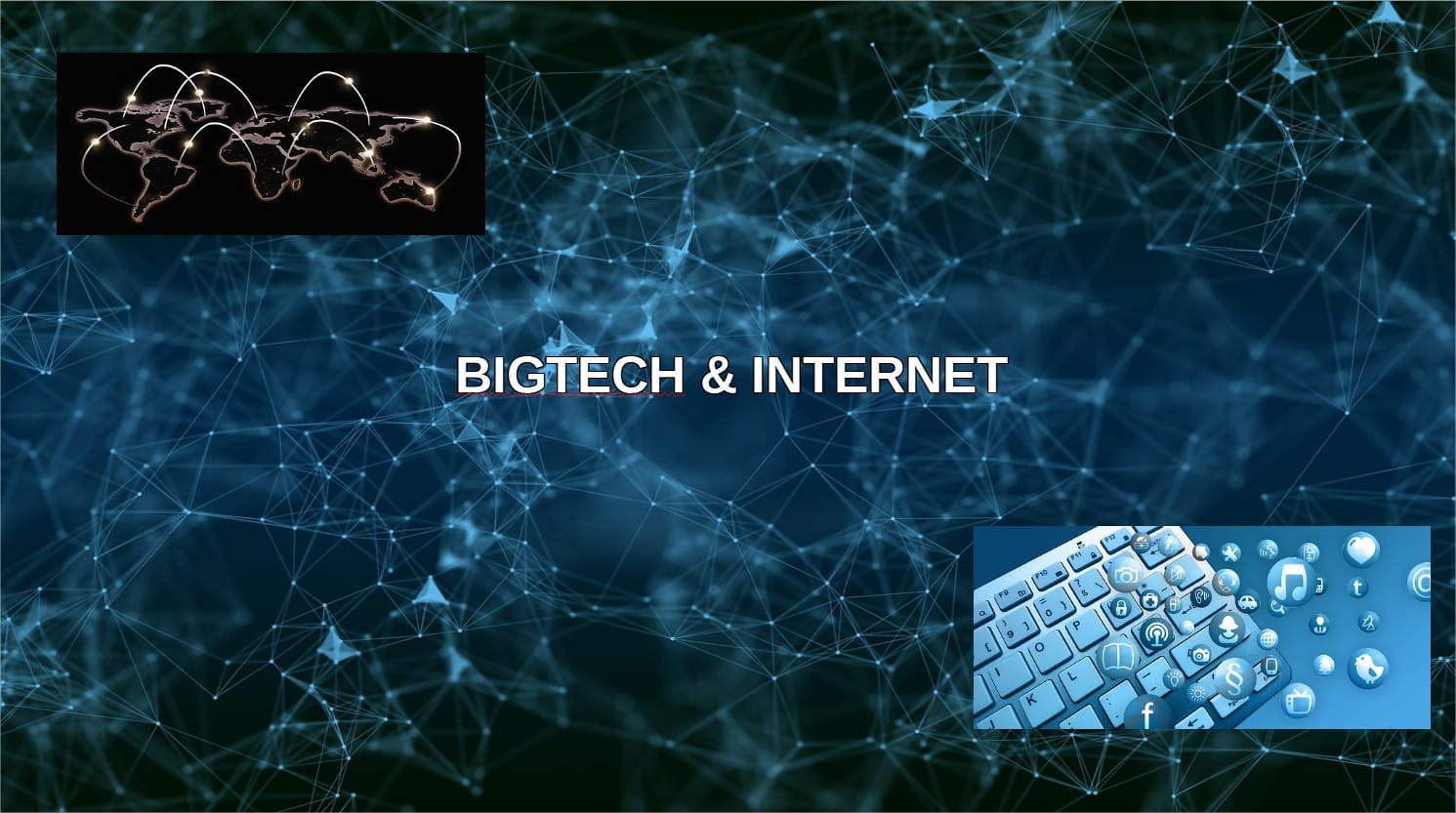 The Internet of BigTechs, what is left of the early Internet?

In 2020, the COVID pandemic led to an acceleration of the digital transformation of entire sectors of our economy, transforming our economic and social behaviors in many ways. However, it would be simplistic to think that these transformations are only due to this pandemic episode, as the underlying trends were already there, but we had not seen the consequences.
In this article, I will try to express my feelings on these upheavals, my vision is personal and is probably subject to criticism, but I hope it will open the debate and allow everyone to form an opinion and to express their vision in return.
To do so, I will have to give my understanding of what the Internet was at its beginning.

The beginnings of the internet

At the beginning of the internet, the web with its decentralized architecture (nodes), allowed a great freedom, both in the field of innovation and freedom of expression. The possibility to reach a larger target through the web came later and was seen as a proliferation of new opportunities.
It is necessary to temper this vision by recalling that the Internet came out of the labs of the DARPA (this research organization of the American Defense), and one can thus suppose that the germs of the Internet of today were already present…
At the beginning of the Internet, there was a significant number of actors in the search engines, this diversity had many advantages, even if sometimes, it was necessary to use several to ensure to scan the web as effectively as possible.
It is true that the Internet was not always easily accessible to everyone, and that it was necessary to have a minimum of knowledge in the functioning of computers. However, this was perceived by the users of the time, these “geeks”, as a moment of unbridled freedom, and it shook up well established industries such as cinema and video rental, and then music, notably through the development of peer-to-peer sharing sites. And finally, from these confrontations were born the new industrial giants that are the video or music streaming platforms…

It is important to remember the existence of cookies and their uses.
With the Internet, to improve the “user experience” and collect a certain amount of information, the “Cookie” was born, originally a connection cookie (June 1994 by Lou Montulli and John Giannandrea), with the first draft of the cookie specifications for Nestcape Navigator…
These cookies were then integrated into Internet Explorer 2, and were therefore used by all browsers. As early as 1996 and 1997, there were many discussions in the United States about the risk that these cookies posed to private data. We will see later on the current impacts of these little bits of code. To conclude on cookies, we must distinguish between technical cookies that are absolutely necessary for the proper functioning of a website (security token, keeping the items selected in an e-commerce cart at the opening of a future session, technical information allowing the broadcasting of video, etc.) and those that we call tracking cookies and that allow us to collect a whole bunch of information about you and your browsing habits…

What have been the fundamental changes in digital technology and its underlying architecture, the Internet, over the last 20 years?
In the digital world, it is clear that the American players were dominant but not necessarily hegemonic, except for Microsoft with its Office suite installed on the vast majority of PCs for professional or personal use.
However, things changed with the arrival of Google and its search engine, one more thought at that time by many digital players. The birth of Google goes back to 1997, which is not so old. It is in 1999 with their establishment in Moutain View that the crazy adventure accelerates and takes off with a fundraising of 25 million dollars. The quality of the algorithm and the way the results are presented lead to a massive adhesion of this search engine relegating its competitors to the rank of mere extras. The implementation of targeted advertising by keywords allowed the company to start earning cash. The development of other applications (Google suite, YouTube) with the parallel massive collection of personal data allowed the company to have a fabulous cash machine allowing it to invest massively in R&D, with also partnerships with DARPA which are not to be neglected and probably also with the CIA… All this allowed them to become hegemonic at least in the Western camp at the level of the search engine, and to carve out a growing share of the market for collaborative solutions for businesses.
If we look at the development of Amazon and Facebook, there are many similarities. Each of these big players, because of their own needs in servers, have developed gigantic and powerful data centers allowing Amazon and Google to become essential cloud providers, with Microsoft which already had a solid experience in servers and associated software…

The other common point of these different actors is to collect massively the data of their users by different means, in particular the navigation data, thus allowing to profile their users and to predict in part their behaviors.
But make no mistake, their competitors, whatever their nationality, have a propensity to do the same, especially for e-commerce platforms…
The last blow that radically changed the way of conceiving the digital world, by making people believe that the digital world was becoming a commodity like electricity, was the emergence of cloud offers for companies.
All of these elements, with politicians who often don’t understand the stakes (except in the US and China?), have led to the emergence of oligopolies, and the antitrust laws that are in place have not been able to impose the dismantling of these behemoths. But did they even have the will to do so? The result is a highly centralized digital world, including the Internet, in the hands of players in a quasi-monopoly situation!

What are the consequences?

They are of several kinds. First, I will describe the consequences at the macro level. Then we will address the consequences at a micro level that impact us directly from an individual and societal organization point of view.
At the macro level, the first observation is that this concentration of financial means and data, which translates into an in-depth knowledge of a large part of the world’s population, gives an unconsidered and unprecedented power to a handful of companies, notably the American digital giants, giving them directly or indirectly more power and influence than many states.
Moreover, the fact that the main digital players, especially in the cloud, social networks, emails or instant messaging, are either Chinese or American, and that each of these countries has extraterritorial laws that allow them to wage effective economic warfare. Economic wars in which many European multinationals, whatever the sector, have lost many feathers, or have even been bought out and then dismantled (Alstom affair). On the macro side, we can see an unacceptable hegemony, a dependence on the technologies of a limited number of players, which is problematic to say the least, and finally an exposure to extraterritorial laws allowing the shameless plundering of our companies and therefore of our know-how…

All of this has consequences at what I call the micro level, which are too often overlooked, for one simple reason: it affects the important but fragmented economic fabric represented by craftsmen, professionals and all the VSEs / IPOs. Some of our economic actors have had the bitter experience of the COVID episode to the benefit of the big players whether they are American, French or of another nationality.
What happened? Let’s remember that, faced with the containment measures, many merchants had to quickly switch to e-commerce. However, these independents are resellers of products that often come from big brands, which themselves have e-commerce sites… When customers go to the marketplaces of these small players, such as those proposed by the Post Office, they are traced, their browsing is captured by Amazon, Google and resold to companies that want to make targeted advertising to the attention of these customers with more aggressive prices… As a result, not only did these small businesses have to invest in urgency but these e-commerce tools have often allowed larger players to siphon off their potential customers.

Similarly, if we dwell on the Amazon model, which from the user’s point of view has managed to set up an unequalled quality of service, we can wonder about a certain number of facts… Amazon has access to all of its users’ data, how much of it does it share with its partners? The ability to find the trends of a market allows it to offer its own products and to compete effectively with all the players in its marketplace… And if it is true that this allows many small companies to launch themselves much more easily and initially expand their visibility and market share, what about the effects of this association on their business in the medium and long term?
All these elements show that, after a more or less unfair competition with the big stores, our local shops suffer for the most part from the generalization of e-commerce mainly linked to the fact that this digital transformation is done by the use of these big digital platforms and/or marketplaces by abandoning them all the richness of their customer data…

So isn’t it time to get out of the BigTech Internet, whatever their nationality, and to develop more decentralized solutions that respect our local economic fabric? Otherwise, in my opinion, this will be the final step in the desertification and lack of attractiveness of our rural or peri-urban territories, which are already hard hit by de-industrialization.
For my part, I cannot accept that the only solution is large megalopolises concentrating all the wealth and population in a dehumanized and artificial environment, in the middle of deserted and abandoned territories.
There is another solution, to go back to the fundamentals of the initial internet, to relocalize the digital, to reconnect it with real life and to attack the trusts that the digital giants have become, as we were able to do in the 20th century with the oil giants! If we were able to do it, there is no reason not to do it now, should we reinforce our anti-trust and anti-monopoly laws, or simply apply the tools already at our disposal (article 86 at the European level)?